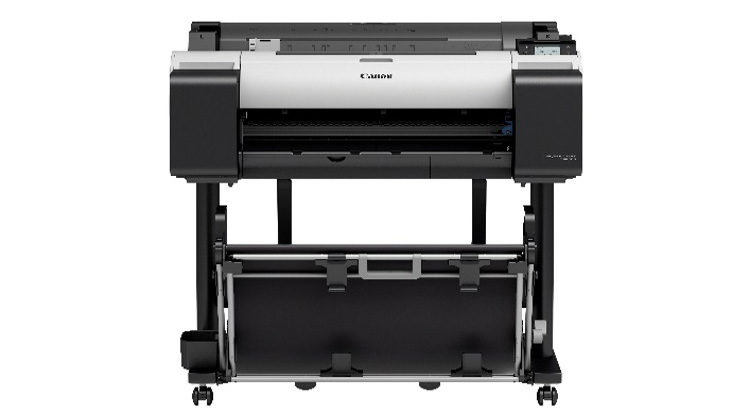 The imagePROGRAF TM Series has been designed to meet demand for a productive, robust, large format printer for business environments that require smaller volumes of high quality prints, with a compact footprint and less noise.

The imagePROGRAF TM Series are compact and quiet devices optimised for space-constrained office environments. The printer’s footprint is as small as 982 x 887 mm for the TM-200/205 models, a reduction of 9% compared to the imagePROGRAF iPF Series.

The new imagePROGRAF TM Series has been developed to meet the demands of quieter office environments to ensure minimal distraction. Without compromising on high productivity, enhancements have been made to some primary noise sources; the Platen Suction Fan now includes a damping structure; the media Cutter cuts cleaner which reduces vibrations; the Media Feeding technology has been developed with the line-feeding motor being slowed and motor pulley diameter being enlarged to also reduce media vibrations. The enhancements have contributed to a reduction in noise by 60% in comparison to the imagePROGRAF iPF Series.

The intuitive operation panel means that users do not require training or specialist skills to operate the device, enabling employees to produce high quality prints in the workplace with ease.

The new imagePROGRAF TM Series aims to make it easy to produce creative and complex applications, with the newly improved software tools. PosterArtist V3.0 poster creation software helps operators to produce multi-lingual posters with over 900 expressions in 10 different languages and using over 350 templates and images, while Free Layout Plus offers a template tool for the design of folded posters.

The LUCIA TD water resistant 5-colour pigment inks used for the imagePROGRAF TM Series can print on water resistant media, offering immediate benefits for customers producing plans and drawings that need to be viewed outside, or creating posters for outdoor use.

Canon offers a range of optimised water resistant media, including polypropylene and adhesive vinyl, for banner and poster displays. Outdoor poster applications produced with the imagePROGRAF TM Series can withstand wet weather conditions for up to six months without additional lamination, further increasing productivity and reducing costs for outdoor prints.

With the imagePROGRAF TM Series, businesses have the capability to produce CAD drawings, GIS maps and posters on demand and in-house, reducing outsourcing costs and response times.

For continuous printing of drawings on A1 landscape plain paper in the fastest mode, the imagePROGRAF TM-300/305 can produce 144 prints per hour, which represents an increase in speed of up to 23% compared to its predecessor, the imagePROGRAF iPF Series, thanks to improved print head scanning and reduced time between processing each print.

‘Hot swap’ ink tanks enable users to replace inks during printing for continuous production. There is also the option to add one of Global Scanning’s fast, high quality scanners, including the T36 scanner with a user-friendly touchscreen display, to the imagePROGRAF TM Series creating the perfect multifunctional office companion.

Keep up to date with news, promotions and the most important information in the printing industry.